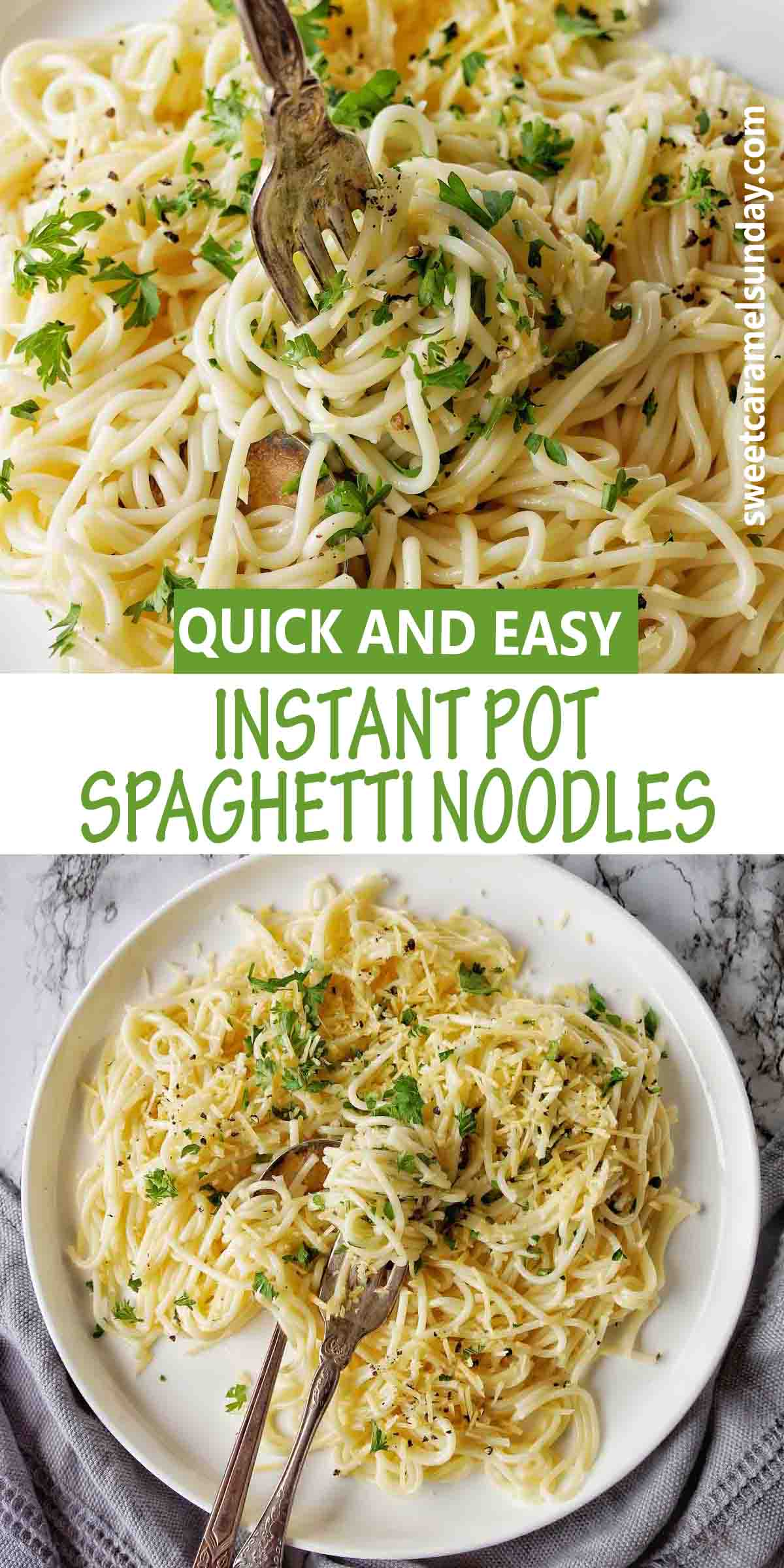 It is super quick to make Instant Pot Spaghetti noodles and I am going to show you exactly how to do it! No more standing at the stove waiting for water to boil, throw it all in, press a button and put your feet up!

This recipe is perfect for beginners as we take it back to (Instant Pot) Basics!

My Instant Pot Spaghetti Bolognese and Instant Pot Penne Pasta are slightly more advance, but I take lots of step by step photos so everyone can follow easily and make their own!

How do you cook Spaghetti Noodles in the Instant Pot?

To cook spaghetti noodles in the Instant Pot, you add the dried spaghetti (broken in half) to the inner pot, slightly separated.

Then your pour over enough water to just cover the spaghetti and add a pinch of salt. Next we seal the lid, press the pressure cook mode, set the level to high, indicate the cook time and the Instant Pot will easily cook the Spaghetti Noodles.

How long does it take to cook Spaghetti Noodles in an Instant Pot?

To cook Spaghetti Noodles in an Instant Pot, refer to the packet instructions of the spaghetti, divide that by 2 and subtract 1.

Pasta cooks a lot quicker in the Instant Pot to the stove, so it needs less cook time.

For example my dried Spaghetti packet indicated the cook time is 10 mins. Divided by 2 is 5, then I subtract 1 and get 4 mins.

It takes 4 mins to cook the spaghetti noodles at high pressure mode, using the pressure cooker function, followed by a quick release of pressure.

Can you cook dried pasta in an Instant Pot?

You can cook dried pasta in an Instant Pot and it is very easy to do so. We follow the packet instructions modify the time slightly for the Instant Pot and the pasta will cook easily.

What is the best way to cook Spaghetti Noodles?

The best way to cook Spaghetti Noodles is in a pot of boiling salted water.

The Instant Pot will do the boiling, we need to only add the dried spaghetti noodles, water and salt to the inner pot.

Ingredients to cook Spaghetti Noodles in an Instant Pot

As you can see the recipe calls for:

This is the basics for what you will need to learn, understand, and master for Instant Pot Spaghetti recipes.

Start with your Instant Pot on a flat dry surface.

Take the Spaghetti, break it in ½ and use your fingers to slip it into the inner pot, separating the strands slightly as you go.

One of the things I love about the Instant Pot is that it will make a few noises as you use it as it does the things to 'ask' it to do.

Let the Instant Pot build to the right pressure, cook the pasta and then it will beep to let you know it is done (you can gently tap it and say thank-you if you want, I sometimes do, haha!)

Using different techniques will result in different textures of cooked pasta from the Instant Pot.

This is an important point, I want to talk to you about in more detail.

The manner in which you add your dried spaghetti to the pot, will make a difference to how it cooks.

I have taken the photos below to illustrate what I mean.

If you have a look in the photo on the left above, you will see that the spaghetti noodles are laid flat in both directions, reasonably close together.

If you have a look at the 2nd photo, you will see that the spaghetti noodles are criss crossed in diagonal directions.

The biggest thing to understand about the above is that the level of pasta in Image 1 has less depth than Image 2. This is important as it means that less water is needed to cook the spaghetti if it is added to the Instant Pot like the 1st image than the 2nd.

I like my Spaghetti with a bit of bite to it, this is perfect for recipes such as my Garlic Spaghetti. As this recipe is all about minimal ingredients and basic flavour combinations, we need to get the texture spot on.

The technique of adding the spaghetti to the Instant Pot in image 2 results in non al dente soft spaghetti that has no bite to it.

You can use either method but know up front what your options are and how it will effect the end result.

FAQs about cooking Spaghetti Noodles in an Instant Pot

These additional tips are so that you can master spaghetti in your instant pot from the 1st time you cook it:

If comfort food, carbs and pasta are your fav, try the following recipes:

Freezer friendly, mom friendly, kid friendly and easy, I have you covered with this recipe!

To indulge your waistline with carbs, take the time to find your favourite recipe here > pasta recipes.

This recipe is more of a tutorial on how to cook Spaghetti Noodles in your Instant Pot than it is a recipe as such.

PIN and save this recipe for later! 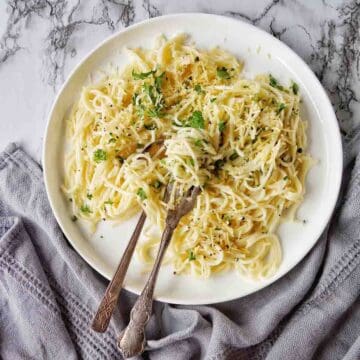 It is super quick to make Instant Pot Spaghetti noodles and I am going to show you exactly how to do it! Throw it all in, press a button and put your feet up!
5 from 5 votes
Print Rate
Course: Dinner
Cuisine: Australian, Internatonal
Keyword: instant pot spaghetti, instant pot spaghetti noodles
Prep Time: 0 minutes
Cook Time: 4 minutes
Instant Pot (self heating): 6 minutes
Total Time: 10 minutes
Servings: 4
Calories: 464kcal
Author: Adrianne

I'm on the same page as you when it comes to busy, tired, lots to do, house, washing, STUFF!

That's why I share recipes like this with you so you don't have to completely loose your zen during the working week.

If you have questions, or make the recipe, please give me a shout, I would love to hear your feedback.

Spaghetti, your Instant Pot and with the push of a few buttons, its done my friend.

This site uses Akismet to reduce spam. Learn how your comment data is processed.

Here you will find quick, easy and delicious recipes that are easy to recreate.